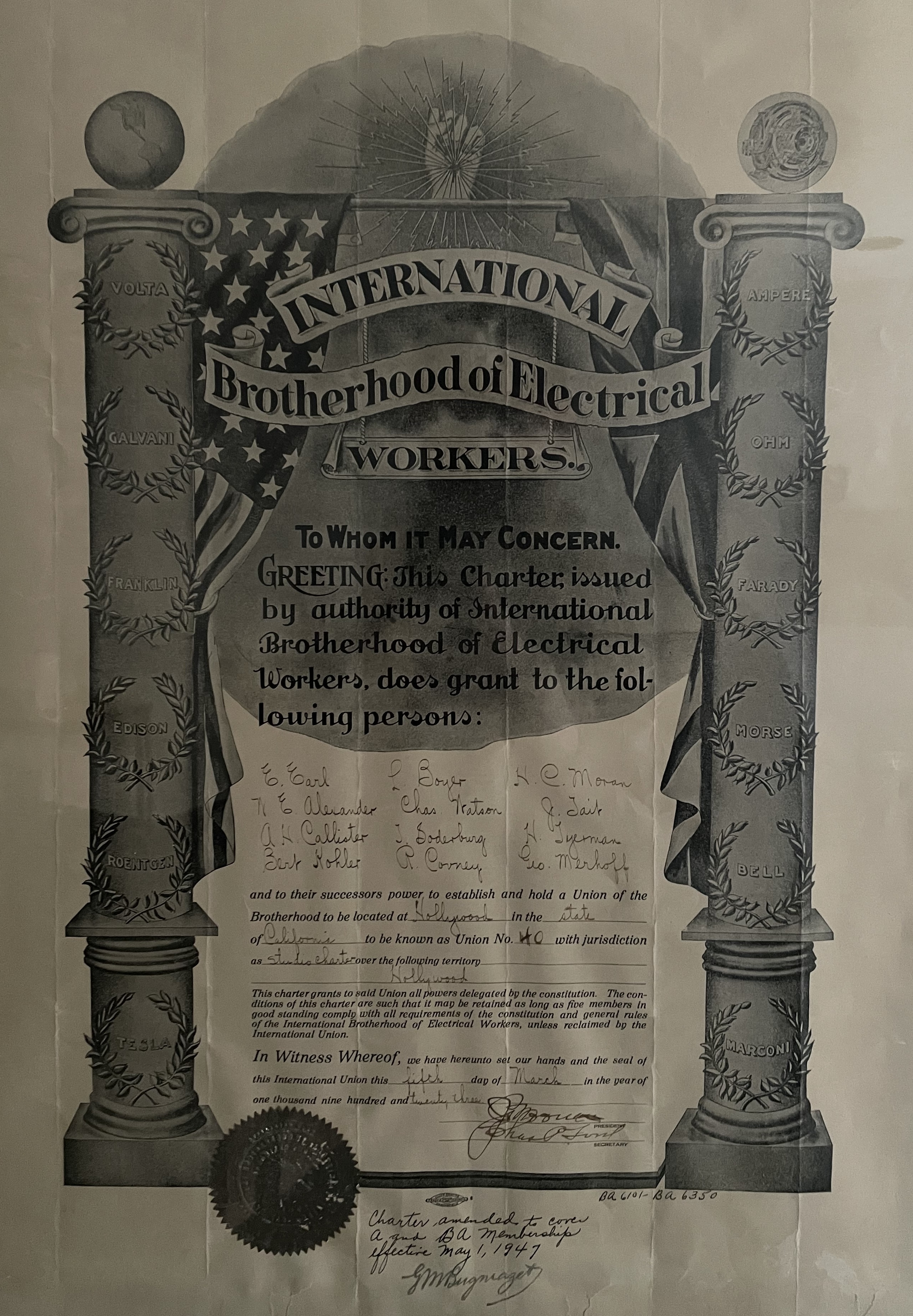 The path chosen by preceding generations of Local 40 members has been barricaded with many roadblocks.

However, their fortitude and dauntless convictions left us the legacy of prosperity we enjoy today. Local 40's charter was originally issued to a St. Joseph, Missouri local union on September 3, 1892. However, the original Local 40 went defunct in December of 1908.

In 1922, International Representative Leon Shook began a relentless organizing campaign in an effort to establish an IBEW Local Union in the emerging motion picture industry. Brother Shook's efforts convinced 12 men to stand up for the same principles that symbolize what we believe in today.... an honest day's work for fair wages and benefits, safe working conditions on the job, and the ability to provide a prosperous future for our families. He assured the original 12 that their best opportunity to obtain these goals was solidarity and on March 5, 1923 the International issued the Local 40 charter for the second time to Brothers E. Earl, L. Boyer, H. C. Moran, W. E. Alexander, Charles Watson, James Tait, A. H. Callister, J. Soderburg, H. Tyerman, Bert Kohler, R. Cooney and George Merhoff.

During the first four years of its charter, our Local had four different Business Managers. In the initial years, because of the extreme sacrifice and demand of the Business Manager's office, it was agreed to rotate the responsibilities while the Local established itself. James Tait, one of the original charter members, was our first Business Manager in 1923.

Our earliest negotiated agreement with the motion picture industry was signed in 1926 by Business Man­ ager G. F. Reid. It was a multi-employer, multi-union agreement. Labor was represented by the IBEW, the Carpenters, IATSE, the Musicians and the Teamsters, while Columbia Pictures, Universal Pictures, MGM, Fox Film Corporation, Paramount Pictures, R-K-O Studios, Warner Bros., United Artists and Samuel Goldwyn represented the Producers.

Wages were $1.00 per hour for studio electricians. Neither pension and health benefits nor overtime pay were part of the contract at that time. In fact, the entire agreement was only 13 pages long. It remained in effect for eight years, until 1934.

In 1934, our jurisdiction included lamp operators, gaffers and best boys, as well as mixers, soundmen and recording and dubbing operators. Electricians' wages were raised to $1.16 per hour, $1.33 per hour for fore­ men and mixers earned up to $2.00 per hour. Overtime pay at the rate of time and one half after six hours and for work on Sundays was negotiated into the agreement. Labor was on a roll - or so they thought.

George Browne was elected President of IASTE without opposition. He, in turn, hired William "Willie" Bioff as his personal representative for IASTE. Events set into motion by Browne and Bioff during the next 15 years would nearly destroy the labor community in our industry. Their ambition was to control all of the labor in Hollywood, including the "star" talent. Browne held influential positions in the American Federation of Labor, as well, and although contrary to the A. F. of L. 's policy, Browne and Bioff felt anyone's jurisdiction or members were fair game to raid and within 18 months they had acquired over 12,000 members and were growing. In an attempt to preserve their independence, organized workers sought to form unions outside of Browne and Bioff's influence. The A. F. of L. studio unions formed the Conference of Studio Unions where each union retained its own autonomy, however they united to promote and defend the common interest of all trade unionists. Local 40 was one of these unions. The Conference soon became the symbol of democratic and honest trade unionism.

The efforts of Browne and Bioff continued until 1941, when they were indicted and convicted by federal authorities and sent to prison. Their successors were Richard Walsh, who replaced Browne as the President of IATSE and Roy Brewer, who took Bioff's job. Their mission opposed the efforts of the Conference of Studio Unions.

October 26, 1943, the members of the Society of Motion Picture Interior Decorators voted to affiliate with Local 1421, a member of the Conference of Studio Unions. After 15 months of deadlocked negotiations, Local 1421 went out on strike in 1945 for nine months. The strike was supported by all of the unions in the Conference, including Local 40. The strike aggravated the jurisdictional controversy already prevalent in the industry and in an attempt to rectify the problem, the A.F. of L. sent a three-man committee to investigate and define the jurisdictional lines. The Committee is­ sued its decision on December 26, 1945 and soon after, the heads of IATSE, led by their President, Richard Walsh, tried to lay claim on the erection of the studio sets by creating controversy over the phrase "erection of sets'' even though IATSE did not have a union to perform this type of work at that time.

This led to many months of confrontation and. al­ though financially weakened by the 1945 strike, and supporting their brothers in the Carpenters Union, the Conference of Studio Unions had no choice but to strike again in September of 1946. They refused to surrender the rights of their members.

In 1946, Roy Brewer, the second in command of IATSE was quoted to have said, "The IATSE and the Conference cannot exist together in Hollywood. It is war to the finish." The strike that ensued was violent and bloody. There were many beatings and mass arrests of 20 to 40 strikers were commonplace. Brother Al Speede, who was serving his second term as Business Manager during these precarious years, died of a heart attack while in office. Undaunted in their efforts, the members of the Conference of Studio Unions began to feel the effects of their second strike, barely recovered from the last one.

Finally, in 1947, after being on strike for several months, the IBEW International stepped in an effort to keep Local 40 from going defunct. The members of the Conference of Studio Unions paid a heavy price for their strong convictions; Local 40 lost jurisdiction over the lamp operators, gaffers, best boys, and the mixers and operators in sound. However, other unions in the Conference fared even worse - the Carpenters and Painters lost their entire jurisdiction, IATSE workers replaced thousands of their members, many of whom had worked in the studios for over 20 years.

Even after surviving all of this, Local 40 was to suffer even further repercussions from the strikes of the 40's. Dissention erupted between the studio electricians, sound technicians, and the technicians represented in the broadcast industry. Those in the film industry who had endured the many months of misfortune while on strike, resented those in the broadcast industry who had remained gainfully employed during those times. Bitterness evolved between our members and factions began to divide the Local. Finally, in 1947, the International had to intervene to resolve the conflict, by forming a separate union for the broadcast technicians. This resulted in the birth of IBEW Local 45 and on May 1,1947, Local 45 was issued a charter by the IBEW.

In the early l 950's, Local 40 regained some of the momentum it had lost in the previous decades. Health benefits were added to our agreement in 1952 with the creation of the Motion Picture Health Plan with a 6¢ per hour contribution rate. Our first pension plan was negotiated in 1954 with a 2¢ per hour contribution rate. Improvements in overtime pay, as well as other improvements in working conditions were negotiated.

The Local 40 leadership at that time attempted to compel the contractors signatory to our building and construction agreement to adopt the terms and conditions of our studio agreement. This infuriated the con­ tractors, who felt they had already negotiated a contract in good faith with Local 40. Even after several warnings from the International Vice President of our District and International President Gordon, Business Man­ ager Charles Thomas refused to change his position. In 1956 fearing the contractors would go non-union, International President Gordon stripped Local 40 of its inside jurisdiction.

Despite losing its inside jurisdiction, Local 40 continued to grow and prosper. The strength and involvement of our membership in the 1960's was reflected through the additional improvements negotiated in our contract.

In the 1970's, our location work was threatened due to an unfavorable arbitration decision concerning generators on cine-mobiles. This brought about the creation of the Production Van Driver Operator classification, which allowed members of Local 40 or Teamsters Local 399, who paid dues to both locals, to drive and operate production van generators on location.

During the '80's Local 40 faced more challenges. Negotiations with the employers were adverse; concessions and take-backs were expected during these times. This largely paralleled the 1980's political climate for labor across the nation.

In 1988, the unresolved conflicts at the bargaining table positioned Local 40 to strike for the third time in its history. The resulting negative consequences were not easily forgotten by labor or management. The heritage of Local 40's solidarity, fathered by the original 12 signers in 1923 and persevered by those who struck during the 1940's, continued proudly through 1988. Nearly 100% of our members honored the picket lines during the entire four weeks of that strike.

The 1990's brought about a revival of membership involvement to our Local. Much of this success was due to the leadership of Brother Tim Dixon. Once again, membership involvement resulted in the negotiation of many successful contract improvements. Local 40 became even more diversified with the organizing of the Special Effects Technicians, Stage Managers and Audio Mixers at Universal Studios Hollywood. Journeyman training expanded, allowing us to perform millions of dollars of fiber optic and data communications work. Local 40 had renewed focus and was back on track again.

One of the most significant events in the history of Local 40 occurred in 1997 when our inside jurisdiction and journeyman wireman classification was restored by International President J. J. Barry. This accomplishment was due to Business Manager Tim Dixon's perseverance. As a result of our restored jurisdiction, the first inside agreement in over 40 years was negotiated with the Los Angeles County Chapter of the National Electrical Contractors Association (NECA). Our re­stored jurisdiction has broadened employment opportunities for our members and has helped to ensure our continued prosperity well into the next millennium.

Our diversification, which has expanded from motion picture production, film processing, everyday re­ modeling and construction to include stage manager responsibilities, computer room UPS installations, fiber optic and data communications and installation and maintenance of energy management systems, has laid a foundation for us to build our future upon.

Advances in electronics and technology, along with the expansion of digital recording and communications play an important role in the growth of the motion picture industry. Technology is moving at such a rapid pace, that what is state-of-the-art-today, may be obsolete tomorrow. Just keeping up with training for the new technology will be monumental.

However, no matter what technological improvements are encountered, some basic labor concepts will never change. Organizing will always play a key role in the growth of our Local. Expansion and improvement of our apprentice and journeymen training programs are tantamount to the success and growth of our Local.

History has proven that the most important aspect of any Local's growth and survival, is membership involvement. Each generation of members has the responsibility of protecting the life of Local 40 and improving the quality of that life for future generations, so that in the year 2023, at our 100th anniversary celebration, our future membership will speak as proudly of us as we have of those who fought for the benefits and conditions we enjoy today.

Local 40 has survived many seemingly insurmountable challenges over the last ninety-eight years, however, the ideals of our original 12 members are as undaunted and everlasting today as they were in 1923.